In his blog, researcher Dhruv Sharma asks why in this ‘age of connectivity’, with so much research already carried out on loneliness interventions, we haven’t yet been able to solve the problem of chronic loneliness.

Dhruv has reviewed a range of loneliness interventions and concludes that there is a significant gap in the research around interventions that are both ‘radical’ and ‘digital in nature.  Dhruv’s own experiments in designing such interventions can be seen in the video below.

When talking about the ‘social’ nature of human beings, noted primatologist Frans de Waal points out that as humans, “solitary confinement” is our second most extreme form of punishment – next only to death.

Like many other supporters of the Campaign To End Loneliness, I find it fascinating that in this day and age of connectivity, we’re all involved in mitigating loneliness experienced by so many members of our society. My PhD research examines interventions that have been designed to offer help and support to older adults affected by loneliness.

We need only look at Cattan et al.’s seminal work on ‘preventing social isolation and loneliness among older people’ where they systematically reviewed loneliness interventions, some of which were implemented more than thirty years ago, to see that for three decades we have been grappling with similar, if not the same, issues.

In his speech in 2013, Jeremy Hunt acknowledged our ‘utter failure’ to confront loneliness as a society. So with all the research on how effective different types of interventions are, why haven’t we been able to solve the problem? How can we design loneliness interventions that are effective?

My research aims to design loneliness interventions for older adults and argues for taking a deep, critical look at the ‘existing’ context, before charting a route to the ‘preferred’.

A distinction between ‘digital’ and ‘physical’ interventions was established based on an older person’s level of (direct) engagement with internet-based technologies. 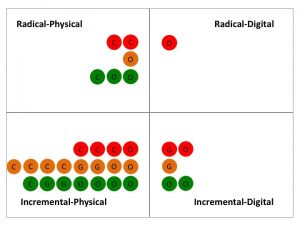 It is also important to understand the distinction between incremental and radical innovation.

After examining a total of 31 loneliness interventions, the adjacent visualization was created:

Gaps in the existing research: interventions that are radical-digital

This early analysis of loneliness interventions revealed a gap in research in the form of lack of interventions that are radical as well as digital in nature.  Interventions such as  Breathe Life or Speaking Exchange, see older adults as providers, rather than recipients, of help and support, and use digital technologies to connect them with others who might benefit from these online interactions.

It is important to acknowledge that such radical-digital interventions may not prove to be a ‘silver-bullet’ solution to loneliness. However, because they are underrepresented, we do not know much about their potential strengths, or indeed, their possible weaknesses.

For example, an ongoing befriending service could look to find befrienders who might themselves benefit from conversations with older adults experiencing loneliness. Digital technologies can then be used to augment the core idea, such as designing services that allow these conversations to occur online.

“As part of my research, I have also developed a framework called Social Innovation For Active Ageing (SIFAA) that argues for providing suitable replacements for the lost (social) roles of older adults by looking at them as providers of, rather than as recipients of, help, support, and guidance wherein they can offer help to someone else who could benefit from interacting with them.

This framework aims to inspire ‘intervention designers’ to develop services that are radically different in terms of how they address loneliness experienced by older adults. For instance, social innovation is inherently collaborative in nature and can be used to engage previously unimagined stakeholders who can benefit from liaising with older adults. Therefore, SIFAA can facilitate the development of, and experimentation with, radical-digital loneliness interventions, which is crucial to understanding the potential strengths and possible weaknesses of radical-digital loneliness interventions in this area.

My own experimentation with SIFAA can be found in the film above, and I am open to feedback, suggestions, and critique to be able to make a meaningful contribution to the area.

* The method and coding categories have been described in more detail in a research paper ‘Radicalising the Designer: Combating Age-related Loneliness Through Radical-Digital Interventions’.