Tackling loneliness through the built environment

back to Press Releases

With new figures showing 3.8 million people in Britain are now chronically lonely, the design of our neighbourhoods can play an important role in tackling 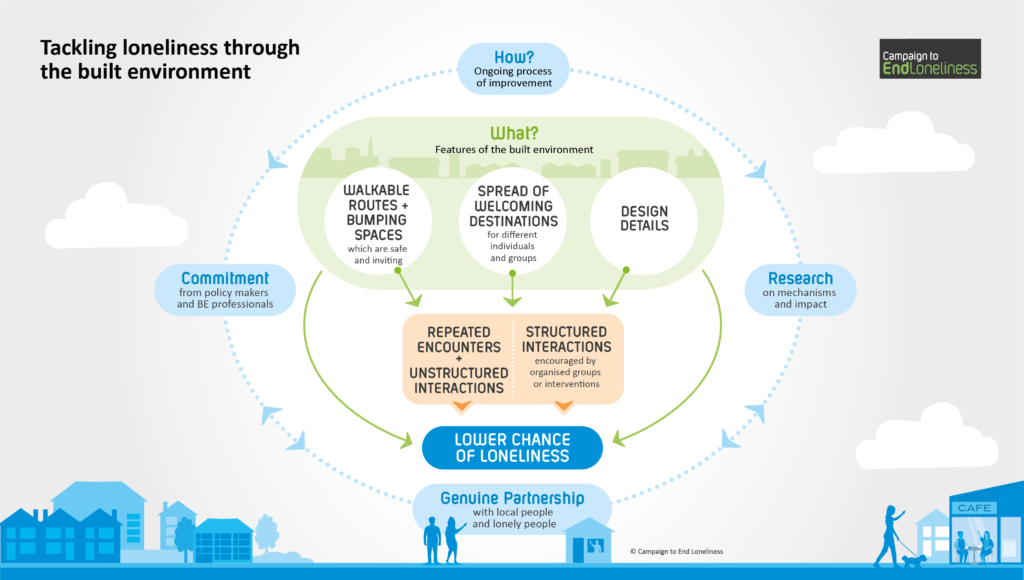 The report found that the way we plan and design our built environment needs to encourage different kinds of interaction – we need bumping spaces like benches where we might see neighbours or acquaintances – so called ‘weak ties’.  Alongside this we also need places for the creation of ‘strong ties’ where we develop and maintain real friendships, for example at community groups and activities. A ‘less lonely’ neighbourhood needs to have the right collection of buildings and friendly shared places which are liked by residents and are, therefore, comfortable to use and will foster encounters with others’.

“Loneliness is one of the biggest issues we face as a society, and has a massive impact on our overall health and mental wellbeing.  New figures show that the number of people who are chronically lonely remains high after the pandemic. So we need to do everything we can, and that includes making our neighbourhoods less lonely.

“Today is World Cities Day and addressing loneliness needs to be prioritised as a matter of course when changes are made to the local built environment. This priority needs to be built into formal regulation through the national planning policy framework and especially through local strategic development plans. Alongside this, training and support is needed for national and local decision makers as well as planners, architects, housing associations and construction companies to understand the impact of loneliness and their power to make change.

“We believe that this report is about beginning the conversation, and building on the expertise that we know exists in some areas on how to build less lonely neighbourhoods. “

The Campaign has drawn on a series of events held over the summer involving designers, architects and planners to make a series of recommendations on how to make our neighbourhoods less lonely.

Identify, protect and create attractive, friendly built environments, green spaces with safe, navigable walking routes to enable access to them. These should be designed to support the development of both weak and strong ties for people of different genders, ages, with physical and mental health problems, who are members of ethnic and sexual minority groups, and of varying socio-economic status.

Involve local people and make this an expected part of built environment practice and policy making: Facilitate local people, including lonely people and people at risk of loneliness, to inform and contribute to the process of change and encourage an expectation that the protection and creation of less lonely built environments is prioritised among the public. And, via training, regulation and examples of good practice, that the issue becomes a standard part of thinking and practice for powerful stakeholders: built environment policy-makers and professionals.

Connect this work to other local improvements which address loneliness:

Connect work to create a less lonely built environment in an area to improvements in housing, transport, employment, education, health, culture and leisure which can also impact on loneliness.

Undertake new research, as recommended by the DCMS Tackling Loneliness Review of Evidence, to strengthen understanding of the extent and mechanisms of connection between specific types of place or aspects of place-based interventions and reductions in loneliness, so informing improved design of the built environment.

The Campaign will be continuing to bring together experts across the many different disciplines and areas in order to ensure tackling loneliness is an important aspect of any changes to our built environment.

For media enquiries or for interviews

Jenny Manchester, Communications Manager at the Campaign to End Loneliness via jenny@campaigntoendloneliness.org.uk or mobile 07729 102338