Barry is one of the stars of our film The Loneliness Project, which has been seen by over 11 million people. In this blog Barry talks about how losing his wife Christine made him want to get involved in the Campaign to End Loneliness.

Grief opens the door to loneliness and I have seen both sides of this dreadful disease, which affects thousands of people every minute of every hour of every day.

It is now almost three years since my darling Christine, the love of my life for forty three years, met a traumatic death in one of the world’s great hospitals. Indirectly, her passing led to my part in this campaign.

It began, somewhat incongruously, in our garden where I stood looking down at the spot where I had buried Christine’s ashes. It’s a serene setting that has become known to family and friends as Christine’s Corner, an array of flowers surrounding a graceful blue urn below which her remains will lie forever.

It’s a beautiful memorial but that evening it occurred to me that in light of her years of humane service to the needy something more public, more tangible, would be needed. 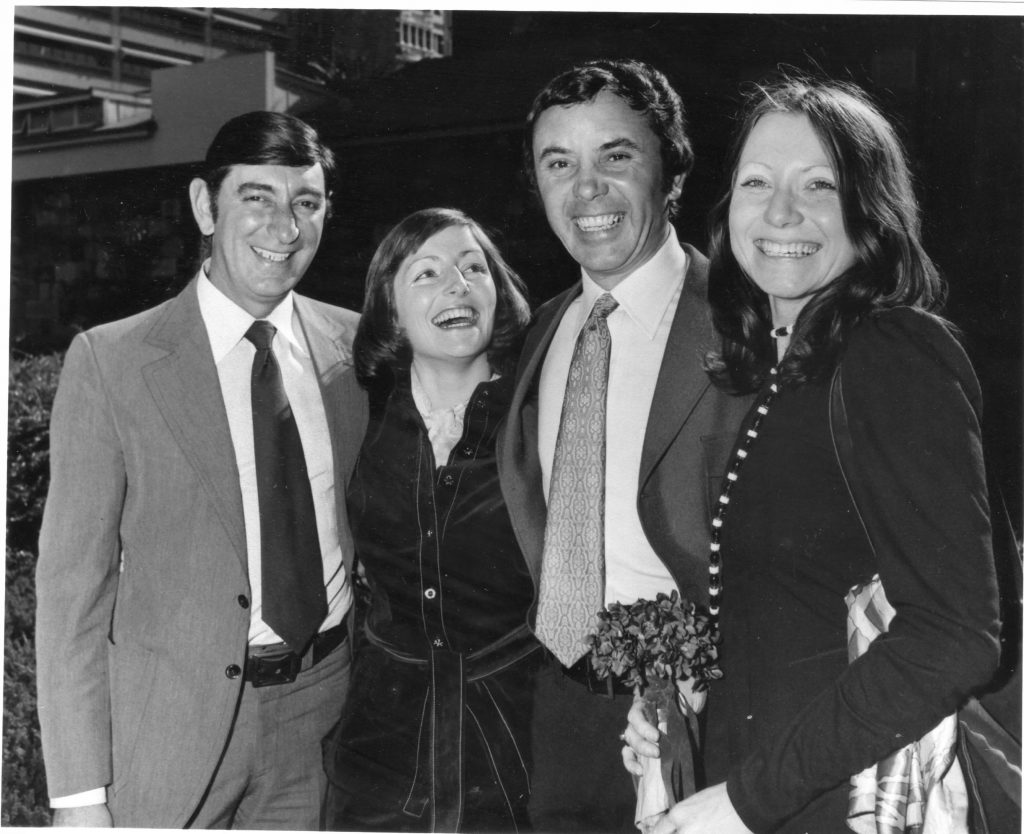 Barry and Christine on their wedding day

Professionally and through her charity work upon retirement, Christine had spent most of her adult life helping and advising the vulnerable, the lonely elderly and the under-privileged; those unable to help themselves. She touched the lives of hundreds of people and was loved beyond measure by all who knew her. One RAF wartime fighter pilot called her “my guardian angel.”

My dearest wish that summer’s evening was that I could find some way to mark her life, to keep alive the memory of my remarkable lady. Quite soon afterwards I learned about this campaign and I knew that I had found what I needed. More, I knew that Christine would be delighted to learn that, as she had, I was helping others in their need.

My role in the campaign

My small part in this has been more rewarding than I could have anticipated. Speaking at the campaign conference was exhilarating; seeing the film we made was enlightening. I realise now why major films cost millions and take months to complete.  Joe and I were speaking for more than an hour but only three minutes appeared on the film, which I now learn has been viewed more than eight million times on the internet! That is astonishing and wonderfully rewarding.

I learned much more about loneliness, too. I was astonished at the sheer intensity of the emotion Joe showed on the film. At one stage he was obviously close to tears and he confessed later that he was very close to walking out, to ending it.

As I have discovered, this is a feeling familiar to those affected by grief and the subsequent loneliness, a combination that is akin to shock or physical pain. The difference, of course, was that Joe knew his torment was finite, that it would end soon. For the grief stricken and the lonely it can be a life-long sentence which they can never talk about or share. It is the loneliest journey.

Loneliness has many faces

Loneliness has many faces, many causes. It is a convoluted mental condition that secrets itself in bereavement, divorce, geographical isolation, shyness, the lack of opportunity or the inability to establish relationships or simple friendships.   It has no regard for position or age and it affects countless thousands of people most of whom suffer in silence year after year, some we would never suspect of being victims.

Many years ago while working as a journalist in Sydney I was frequently called upon to interview visiting celebrities. They might be international sportsmen, film actors, stars of television and show business such as singers, or comedians, all famous and all freshly arrived in Sydney for a public appearance of some sort or other.

Most of them were ready to cooperate, eager even, and usually friendly, the resultant interview invariably a delight; except one.

I met Tony Hancock, the British television comedian, in his room at the Hilton Hotel and it proved to be the most excruciating hour I had known in my career.  I could barely get a word from him. Comedians don’t tell jokes off-stage and some of them aren’t very funny in real life but this went to the extreme: poor Hancock appeared desolately unhappy.  I said later that he was arguably the loneliest person I had ever met. Later that night, alone in his room, 12,000 miles from home, he took his own life.

The reality of loneliness

It was a traumatic introduction to the realities of extreme loneliness, one that shaped my life and which I would know at a deeply personal level when I lost Christine.

Being fifteen years her senior we had tacitly assumed that I would go first. Her sudden and tragic death left me in a state of physical shock so deep it defies description. Suddenly the plans we had made for our final loving years together were no more; my future was a wasteland, full of empty days with an empty heart and a soul bereft of love. I didn’t want to be here any longer; I came very close to ending it. Such is the consequence of extreme loneliness. Later, when the worst had passed, I recalled poor Hancock all those years ago. Now I had truly learned of the feelings, the trauma, he had known his awful last night.

The significant point about my personal disclosure, though, is that no one knew of my predicament until much later, when I recalled the episode in my book in memoriam to Christine. I still haven’t told anyone face to face, friends or family, how close I came to the end. This is a situation that doubtless occurs hundreds of times every day, perhaps to someone you know, maybe even a person you love.

Sailors have a dictum: “Never, never, take the sea for granted.”

We should all treat loneliness with similarly fearful respect. If you know or meet a victim try to engage with imaginative conversation, with meaningful phrases, not simply banal chat. Try to establish rapport. Above all, show interest! Be aware. Respond.

Search out loneliness; face it; fight it; you could save a life.

Barry’s book, entitled Remembering Christine, is a guide to grief and loneliness. It is available from Amazon and via Kindle.

This article has had 5 comments