Chris Heath is a TV Producer, Author and Podcaster.  He’s created shows for the BBC, ITV, Channel 4 and CBBC, including Holiday of my Lifetime with Len Goodman and The TV That Made Me With Brian Conley. He is also the creator of the children’s books series, The World According To Grandpa. Chris has been travelling the length and breadth of the country to speak to older people about their incredible lives.

In this blog Chris talks about why he started the podcast Two Cups Of Tea and how you can get involved.

I was travelling on a train into Kings Cross recently and a cheery older ticket inspector took my ticket, cutting a hole in it with his special little hole punch-thingy. It was only when I took the ticket back that I realised that it was a butterfly-shaped hole. It made me smile, so when I got off the train, I jogged past the crowd of passengers to catch up with the inspector.  I asked him if these butterfly holes on tickets were a new thing. He told me that, as far as he knew, it was only him that did that. He had ordered his bespoke hole punch specially to brighten people’s day. He then said, “As you’re interested, I’ll show you what I do with children’s tickets”.

So he took a different hole-punch and cut a choo-choo train shape out of my ticket. Then he asked me if I believed in magic and told me to squeeze the little train-shaped hole as hard as I could and I’d ‘hear’ the train. So, despite feeling a bit stupid stood in the middle of Kings Cross station, I squeezed the ticket like he’d asked, and he turned away and secretly tooted a wooden train whistle. He was quite clearly a mad as a brush, but he made my day, nevertheless.

When I told this to a friend of mind later, he said, “Awww, people like that make the world a better place, don’t they!”.  I thought, yes they really do. But only if you take the time to talk to them. 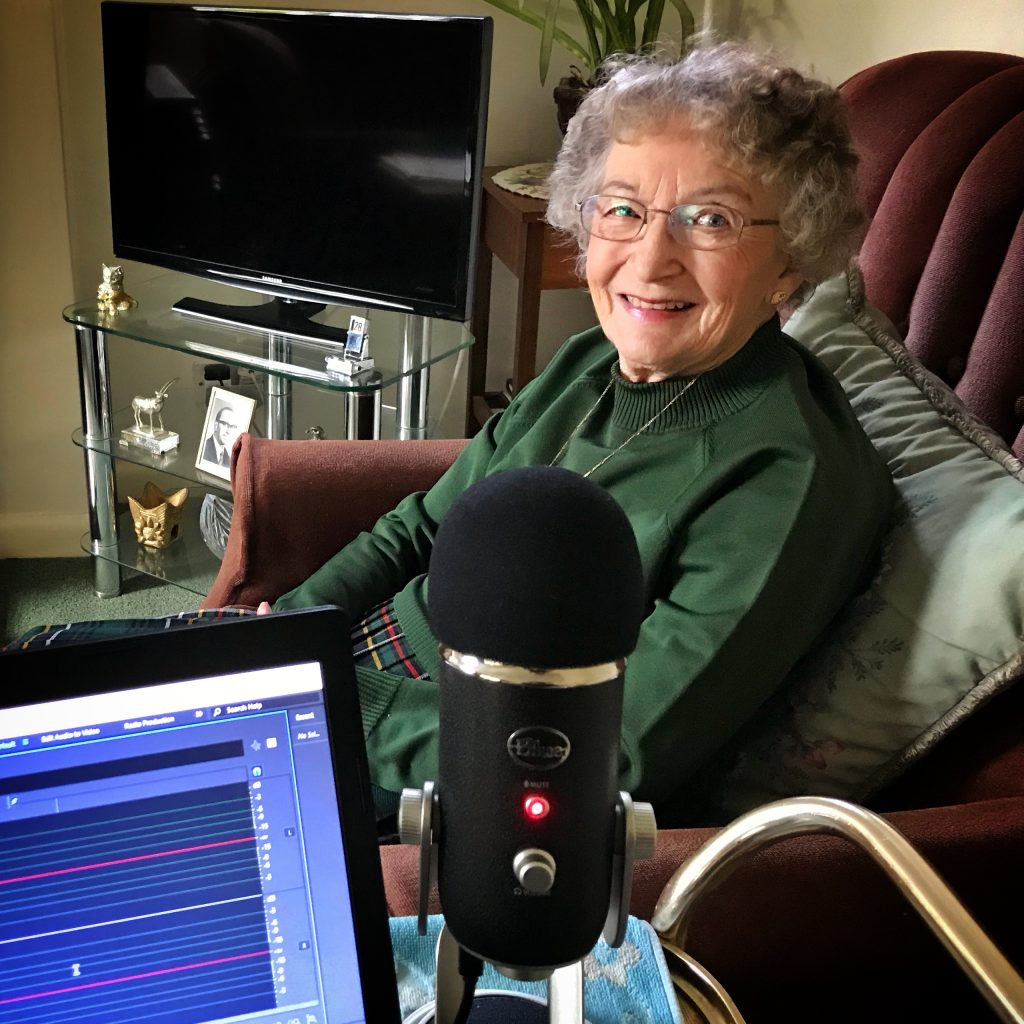 Jessie being interviewed for the podcast

It made me think about all the people out there who’ve got amazing experiences to share and stories to tell, but who’ve got no one to tell them to. Because, just to think purely selfishly for a moment, how many hilarious stories and amazing tales will die out without being told, just because we didn’t get out there and talk to the people around us more?

It’s like hearing that some lovely old folk songs have been forgotten, just because they don’t get played any more.

So I decided to start up a Podcast.

“These podcasts are a celebration”

I’ve recorded several conversations so far and I’ve loved every single one. In each show, I chat with a different older member of the public who is living their golden years alone. We’ll talk and laugh over a cup of tea (and probably a chocolate biscuit). But, this isn’t a hand-wringing, gloomy conversation about solitude.

Instead, these podcasts are a celebration of some extraordinary characters and the lives they’ve lived. I’ve heard stories of bravery and tales of family life, Sunday roasts and selfless endeavour. From heart-warming tales of first crushes to hilarious stories and narrow scrapes at work, in service and even under fire.

What I’ve found is that it’s not the amazing deeds or achievements that are necessarily the standout moments, but the commonalities and the familiar details that unite us. I have honestly never laughed so much in my life as with the people I’ve been recording with. First and foremost, this podcast aims to show that everyone has a fascinating story to relate, regardless of age or circumstance.

Each of these podcasts are recorded in the interviewee’s home for their convenience and won’t take any longer than 120 minutes. For more information or to nominate either yourself, a neighbour, friend or loved one to be a guest, please email: chrisheathpodcast@gmail.com, together with a short description of the person you’re nominating and the part of the country they live in.

You can listen to the Two Cups Of Tea podcast on the Acast website or on iTunes.

This article has had 9 comments