“When I came out of detox, a peer support worker took me out for coffee, and that changed and saved my life, it took me out of my depression”, says one of Bristol Drugs Project’s Champions sharing his experience being supported by a peer during his recovery, now this group of older people are lending a helping hand to others overcoming similar issues

I visited the Champions at one of their regular meetings where they welcomed me as part of their gang for a day. The Champions are older people that attend BDP’s ’50 Plus Crowd’ group regularly and who have been trained to support peers in their journey to recovery. These volunteers have undergone 6 weeks of training that have given them the confidence and tools to make home visits to people facing similar issues in the earlier stages of recovery. BDP’s Champions is one of 17 projects funded by Bristol Ageing Better (BAB) as part of their “Group Work and Peer Support” stream of funding. 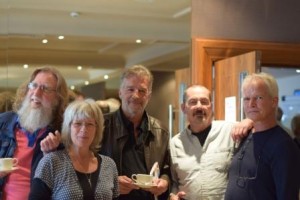 One key element of BDP’s Champions is that older people with alcohol and/or drug misuse problems are visited by people of a similar age. Andy Bowles, BDP’s Older People’s Service Worker, shared with me his thoughts about how a peer support approach can have a massive impact when addressing this issue among Bristol’s older population: “If you are visited by someone of a similar age who has had a similar experience, you’ll feel less judged, more comfortable and more able to accept help hopefully.”

Meeting the Champions inspired me and also allowed me to further understand the support you can get by being with others who understand your position and who are willing to share their experiences. Group work and peer support uses peers to help people focus on their assets, abilities and potential routes to recovery and general wellbeing. Peer support mobilises the insights and empathy of people who share similar problems or experiences to support others who are living with long-term mental or physical ill health, or people experiencing similar transitions in life, for example bereavement or becoming a carer for a partner or relative.

Bristol Ageing Better, a partnership of organisations working together to reduce loneliness and isolation among older people in Bristol, recognises peer support groups as a key element to address social isolation. Peer support provides a safe and understanding helping hand at difficult times in people’s lives, and gives hope of a better future.

Learn about BAB’s Group Work and Peer Support as told by the BDP Champions by watching the film below.  To learn more about Bristol Ageing Better, click here