This week, the Campaign to End Loneliness team travelled to Lisbon to run a workshop at the Envelhecimento & Inovação Social, a conference on ageing and social innovation organised by the Calouste Gulbenkian Foundation.

The workshop asked participants to consider how commissioners can be persuaded to invest in services and activities that prevent or alleviate loneliness in older age. Groups identified who the fund-holders are in their countries, discussed why addressing loneliness is a priority and suggested what was needed to convince commissioners to act.

A number of issues were raised, but one that came from delegates of all nationalities was the difficulty service providers, and local government, faced in measuring the success of interventions. This was partly due to a lack of data on prevalence of loneliness, but also difficulties in demonstrating the success of any service or activity commissioned. It was observed that without evidence of success or savings made, justifying investment in preventative services for loneliness was often too difficult.

So, it was particularly well-timed for us that the Department of Health decided to announce new measures of loneliness and isolation for local authorities on the day we returned from Portugal.

These were first promised in the Department’s Care and Support White Paper in June and will be included in the Adult Social Care and Public Health Outcomes Frameworks for 2013/14. The frameworks give councils a way to monitor the quality of care and support, by identifying what is best practice and backing this up with data to help them benchmark their progress.

Including a measure of loneliness therefore gives a clear message to commissioners that preventing or alleviating loneliness is an important part of improving health and quality of life. The data collected will not only help councils and local NHS bodies identify what populations are at greatest risk – but also monitor the success of any interventions subsequently commissioned to reduce it.

What might appear as a small change in policy will lead improvements in practical, every-day attempts to reduce loneliness – by encouraging funding of services; making sure they are directed towards the most vulnerable and allowing commissioners to work out what is actually making a difference to people in their communities.

But, it’s an important first step and once a measure is created for the whole population, local authorities (and practitioners) will be that little bit better equipped to address loneliness in older age. 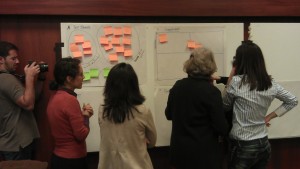