Everyone needs other people, but not everyone has someone. For people who become isolated because of ill health, disability or social disadvantage, being matched with a befriender often fills a big gap

People and communities are encouraged to recognise the benefits of befriending and its role tackling loneliness and social isolation during the annual Befriending Week from 1st to 7th November. In this blog Muriel Mowat, a Membership Officer at Befriending Networks talks about the difference befriending can make.

This year’s theme is “Befriending Builds Communities”, and will celebrate the work of befriending organisations and projects across Scotland and the UK. Organised by Befriending Networks the week is designed to raise awareness of befriending and the impact it has on individuals and communities.

Throughout the week befriending organisations are encouraged to share stories, pictures and quotes from their events, volunteers and befriendees about the impact that befriending can make. These are being shared on Facebook and Twitter.

One such story is that of Cameron who, as a young boy, had an unusual but all-consuming passion for buses. This was nurtured by his befriender, Margaret, a volunteer with Dumfries & Galloway Befriending Project, who arranged for him to meet the owners of a local coach hire company.

Cameron so impressed the owners with his breadth of knowledge and enthusiasm about buses, that, later that year, they organised an incredible Christmas surprise. A totally unsuspecting Cameron visited the bus depot to discover to his amazement that the owners had named the latest addition to their fleet after him. 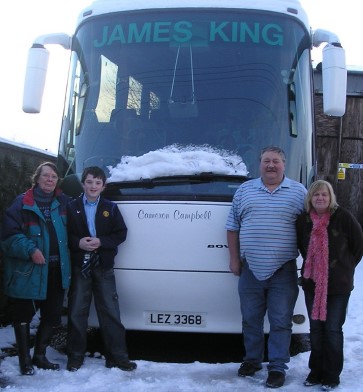 His passion for buses has continued over the years and he is now (aged 20) ‘living the dream’ as he describes it, driving a service bus for Stagecoach– as the company’s youngest driver in Dumfries and Galloway.

An estimated 1.2 million Britons are chronically lonely and are 50% more likely to die prematurely than people with a good social networks. This means loneliness as big a mortality risk as diabetes.

There is a growing body of evidence on the negative impact social isolation and loneliness can have on individual’s physical and mental health.

It is encouraging to note national responses to this issue. The Scottish Government is at the early stages of developing a National Social Isolation Strategy.

This, plus the aim of the Jo Cox Foundation to bring communities closer together, and the work being undertaken by the Campaign to End Loneliness, provide a national strategic and policy framework within which befriending is an important component.

Befriending Networks, the national intermediary for befriending organisations across the UK and beyond, has been closely involved in the development of the Scottish Government Strategy.

Their 270 members provide befriending for; children and young people, families, people with mental ill-health, people with learning disabilities, and older people, amongst many others. The Network works on behalf of their members to promote the benefits of befriending, and to co-ordinate the contribution of the sector in addressing social isolation throughout our communities.

If you’d like to take part in befriending with Befriending Networks visit their website and find a opportunity near you.